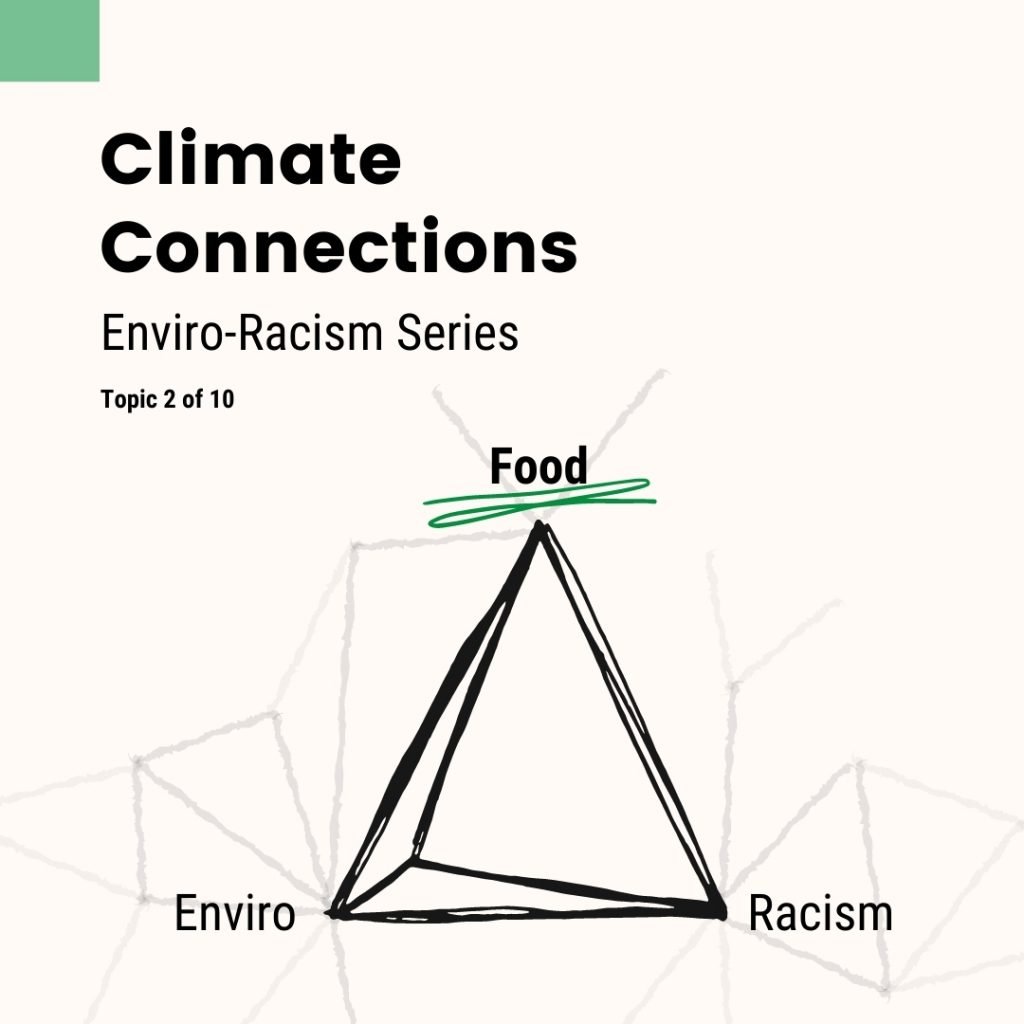 Food is one of the joys in life, but food production can be anything but a joy. From planting and packing to preparation and purchasing, our current system is rife with racial inequity and environmental disaster. Communities of color are hit with pesticide poisoning in California’s Central Valley, COVID deaths in Tyson meatpacking plants, industrial run-off from chicken farms, and food deserts that bolster reliance on climate contributing fast-food chains. And for those that want to get involved in farming, an industry with a shortage of people and an average age of 57.5 (as of 2019), they are pushed out, strong-armed, and given bad or no loans. All of these are results of our land-use and resource hoarding which are classic tactics used to enforce and establish a racist system.

Tip: Consider scheduling time in your week to learn!

You may not have time to read all the articles, watch a documentary, or go down all the rabbit-holes you want to right now. That’s okay. One good way to make time for learning is to literally schedule read, watch, and support sessions throughout your week. 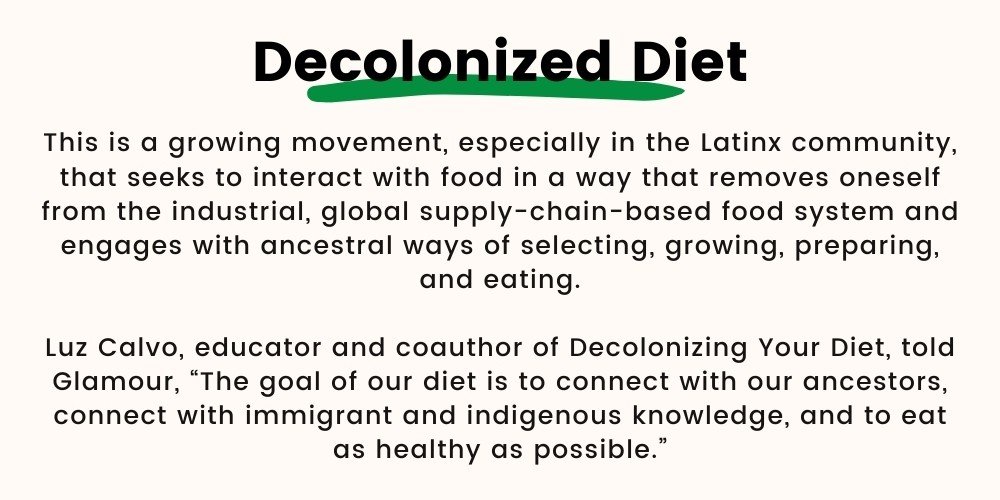 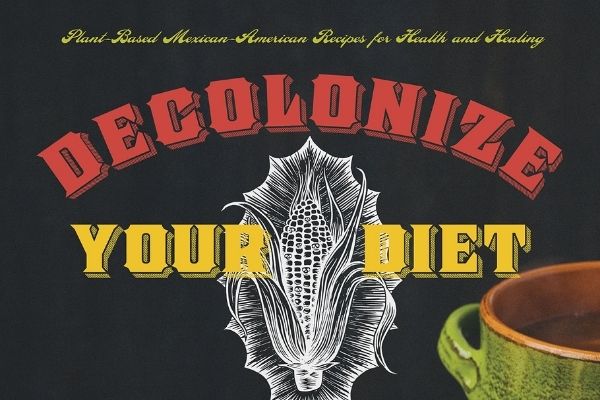 Decolonize Your Diet: Plant-Based Mexican-American Recipes for Health and Healing

More than just a cookbook, Decolonize Your Diet redefines what is meant by “traditional” Mexican food by reaching back through hundreds of years of history to reclaim heritage crops as a source of protection from modern diseases of development.
Buy The Book»

Climate Creative Editor Note
A friend who's very involved with Latinx food justice movement credited this book as being a pivotal part of her awakening and diet changes. It has beautiful photography, a very human story of two partners searching for ways to use food as medicine, and interesting perspectives on current and past food systems. It seems like a meaningful read for those with common ancestry and an interest in food systems. 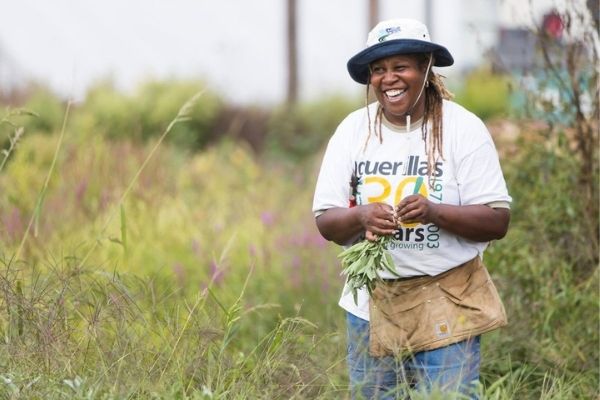 Op-ed: How Urban Agriculture Can Fight Racism in the Food System

The food system is not broken; it’s working exactly the way it’s supposed to: as a caste system based on demographics, economics, and race. If we’re going to transform this food system, we have to look at power and who has power. The current food system is controlled by a handful of people who are predominantly white men.

People have been growing food in cities for thousands of years. There seems to be a feeling that if people are able to grow food in their communities that things are going to change. For me, growing food isn’t enough. We need to address the structural, industrial, and environmental determinants that reinforce racism in our society.
Read More»

Climate Creative Editor Note
I like how this article addresses a plethora of issues relating to the food industry that many people wouldn't think about such as community gardens, bees, power dynamics, etc. The author uses a very active tone that makes me want to change the way things are. 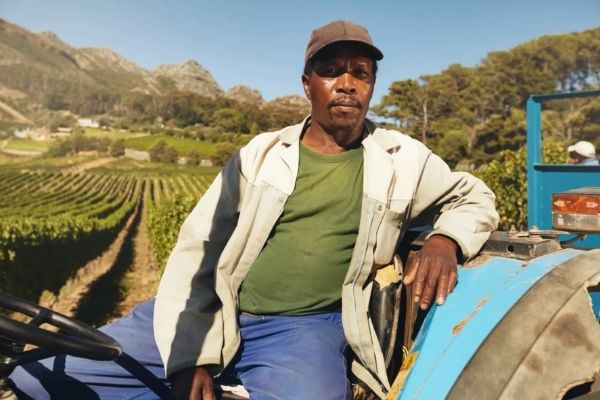 How Racism Has Shaped the American Farming Landscape

Farming in the United States is enmeshed with both racism and capitalism in a way that has had a profound impact on who owns, accesses, and benefits from farmland. Recently, I published research with Portland State University student Amy Marion examining data on non-farming landowners, farmers who own and lease land, and farmworkers. We found significant racial/ethnic disparities when it comes to representation, land, and money.
Read More»

Climate Creative Editor Note
I started on this journey and ended up learning so much about the discrimination and dissipation of African American farmers and that we are more segregated than a century earlier. 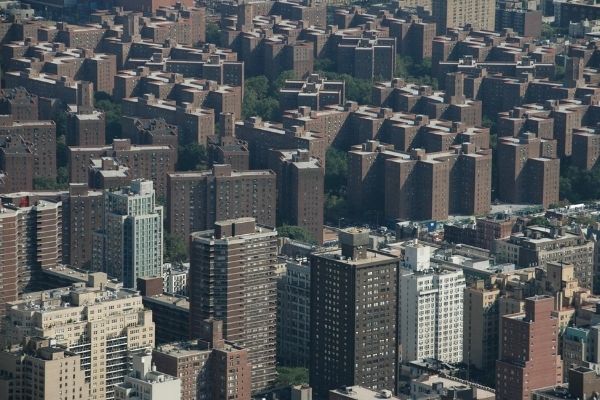 How a Pandemic Exacerbates the U.S. Environmental Justice Divide

According to the U.S. Department of Agriculture, nearly 18 percent of Americans live in a food desert—that’s 54.4 million people. Buying a lot of food at once is hard when you struggle to pay the bills. And many people in these communities likely hold jobs in the service industry that have been cut as restaurants shutter to protect our health.
Read More»

Climate Creative Editor Note
This article does a good job of describing the disproportionate effects of the pandemic on communities of color with regards to food scarcity, environmental pollution, and job security. It made me realize how little the pandemic is affecting me compared to those who are directly experiencing environmental racism.

The Young Black Farmers Defying A Legacy of Discrimination

Kendrick Ransome started out farming a few years ago with just a hoe, a rake, and a shovel.

He could have used support getting his hog and vegetable business off the ground, but he was wary of asking institutions for help. “My big brother told me, ‘Stay away from loans,’” said Ransome. In 1925, most farmers in his rural hometown of Edgecombe County, North Carolina, were black. But now, the 26-year-old is an anomaly.

“When they did take out loans and they were unable to pay them back, you lose everything you got — that’s including your farm and your land for your family.”

Ransome’s fear of institutions is based in the centuries of discrimination black farmers have faced across the country. But despite that history, he and other young black Americans are reclaiming the trade.

The forces pushing black farmers off their land in the 20th century were manifold, and the impact was devastating. In 1920, there were more than 925,000 black farmers; by 2017, there were fewer than 46,000, according to the U.S. Department of Agriculture.
Watch On»

Climate Creative Editor Note
I found the video to be very well done and directed and really speaks to the discrimination against black farmers. 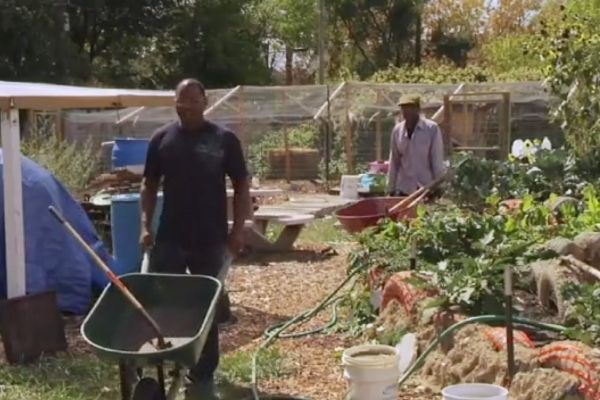 Urban Roots follows the urban farming phenomenon in Detroit. A timely, moving and inspiring film that speaks to a nation grappling with collapsed industrial towns and the need to forge a sustainable and prosperous future.
Rent The Movie»

Climate Creative Editor Note
It's cool to see Urban Agriculture like what Karen Washington wrote about in her op-ed in action and serving a community. 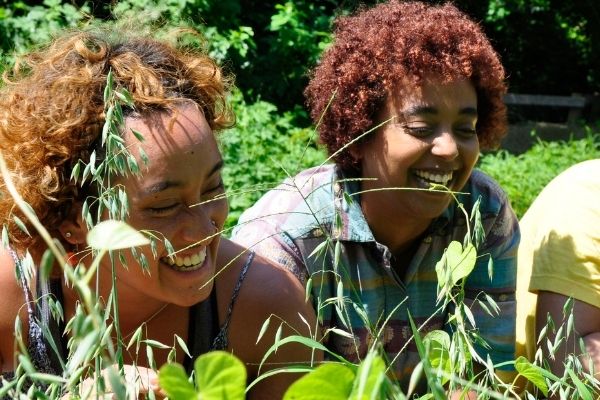 Climate Creative Editor Note
A follow doesn't cost a thing! It helps show community support for a movement and keeps you updated on their progress. CoFED is covering Canada and the US and has great programming like their Racial Justice fellowship that is worth keeping abreast of. 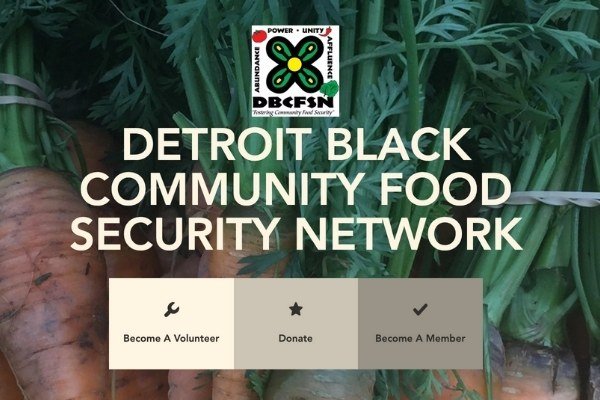 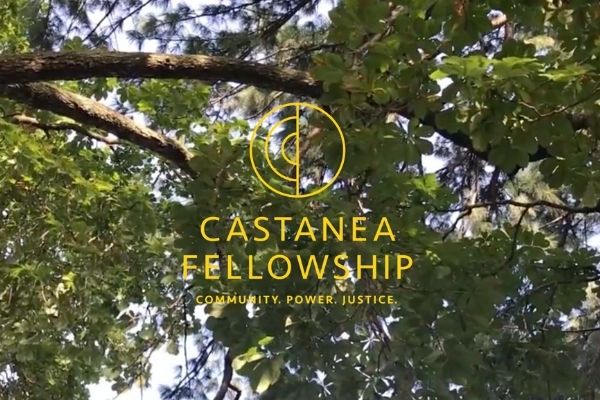 Apply (for next year)

Climate Creative Editor Note
We clearly need diversity and good ideas in our food systems and the Castanea Fellowship is well funded and trying to expand on that. Unfortunately the application is over for this year, but put it on your calendars for the next application cycle!